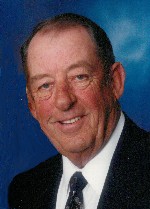 Clarence was a member of Local 520 Union Operating Engineers for 50 years, and owned Stehl’s Trenching Service for 11 years.  Later he went on to work for Veile Construction until he retired.  Clarence donated many hours to serve his community. Along with spending time with his family, he enjoyed farming and hunting at his farm in Ellis Grove, IL.  He was truly happy on a piece of machinery or a tractor, watching things grow at the farm or in his garden.  Mr. Stehl was a member of St. John the Baptist Catholic Church, Smithton, IL. He was a United States Army veteran.

He was preceded in death by his parents, Arthur and Anna Mae, nee Herzog, Stehl; and a brother, Armin Stehl.

Memorials may be made to New Athens Home for the Aged or to St. John the Baptist Catholic Church, Smithton, IL. Condolences may be expressed to the family online at www.rennerfh.com.