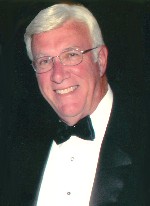 Print Obituary
Albert John Hoppenjans, Jr., “Jack”, of Belleville, Illinois passed peacefully from this life on November 15, 2021, after a lengthy battle with Parkinson’s Disease.  He was 84 years old.

Jack was born on February 13, 1937, to Winifred, nee Lundy, and Albert Hoppenjans, Sr. in East St. Louis, Illinois. He graduated from Assumption High School, East St. Louis in 1955 and married his high school sweetheart, Jeanette, nee Andres, Hoppenjans on December 26, 1959. Jack honorably served his country in the United States Army from 1959 to 1964. In 1960, he began his career with Turner Electric Corporation as a Design Engineer.  After 44 years, Jack retired as President of the company on April 16, 2004. He was a longtime parishioner of St. Peter’s Cathedral in Belleville, Illinois. Known by his closest friends as “Hoppy”, his love of family and passion for boating was second to none.  There were to be no activities (including daughters’ weddings) planned between Memorial Day and Labor Day, as those summer weekends were reserved for the lake.  “Family time” on the water was instilled in and passed onto his daughters and their families.  After his retirement in 2004, Jack enjoyed escaping the cold Midwest winters and spending those months in Fort Myers, Florida with Jeanette.

He was preceded in death by his parents, Winifred and Albert Hoppenjans Sr.; in-laws, Otto “Andy” and Bernice Andres; and a brother-in-law, Terry Andres.

In lieu of flowers, memorials may be made to the Michael J. Fox Foundation for Parkinson’s research or to the Special Olympics. Condolences may be expressed to the family online at www.rennerfh.com.

Visitation:  Friends may visit from 9:00 to 10:45 am Wednesday, November 24, 2021, at George Renner & Sons Funeral Home, Belleville, IL.  Standard CDC guidelines, including masks and social distancing will be observed.