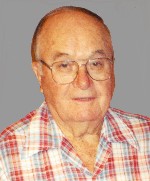 Mr. Juenger, a lifelong farmer, worked as a millwright for Mallinckrodt in St. Louis, MO, for 38 years.  He was a past member of UAW Local 1887 and a member of the Local 1887 Retirees.  He was a member of St. Paul United Church of Christ, Belleville, IL, Belleville-Swansea Moose Lodge 1221, American Legion Smithton Post 937, and a former member of the Belleville Anglers Club and Southside Improvement Association.  He was a World War II U.S. Army veteran, serving in the South Pacific.  Al was an avid hunter and fisherman and a loyal St. Louis Cardinals baseball fan.

Surviving are his loving wife of 63 years, Vera, nee Fix, Juenger, whom he married on August 30, 1952;
and many beloved nieces and nephews, great-nieces and great-nephews.

The Juenger family would like to thank the doctors and nurses who took care of Albert at both Memorial Hospital and Memorial Care Center.

Memorials may be made to St. Paul United Church of Christ, Belleville, IL, to American Legion Post 937, to the American Heart Association, or to the charity of the donor’s choice.  Condolences may be expressed to the family online at www.rennerfh.com.