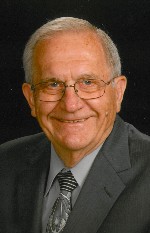 Mr. Wunderlich graduated from Saint Louis University with a degree in accounting. He was a certified public accountant and was the tax controller for Anheuser-Busch, Inc. before retiring in 1996. Al was a Korean War U.S. Army veteran.

Albert was a longtime member of the Belle Clair Rotary Club and a founding member of the Franklin Neighborhood Association. Mr. Wunderlich was also very involved in many other clubs and organizations. He was past president of the Congregation of St. Paul United Church of Christ and served on the board of directors of St. Paul’s Home, St. Paul’s Foundation Board, and Memorial Hospital Board, Belleville, IL. He also served as a boy scout leader and a Khoury League coach.

Mr. Wunderlich was the recipient of many awards throughout the years, including the Exchange Club Book of Golden Deeds Award, the Boy Scouts of America Okaw Valley Council Distinguished Citizens Award, Illinois School Social Workers Citizen of the Year, the St. Clair County Health Department Willard C. Scrivner Award, the Ambassadors Club Commitment to Community Award, the Commerce Bank Community Service Award, the Illinois State Medical Society Humanitarian Award, the Greater Belleville Chamber of Commerce Citizen of the Year Award, and the St. Clair County Bar Association Liberty Bell Award. Al was also awarded proclamations from both the City of Belleville and State of Illinois Representative Tom Holbrook, for his dedication and service to children and the community.

Memorials may be made to the Franklin Neighborhood Association or to Concordia United Church of Christ, Belleville, IL. Condolences may be expressed to the family online at www.rennerfh.com.

Visitation: Friends may visit with the family from 4 to 7 p.m. Friday, January 24, 2020, at George Renner & Sons Funeral Home, Belleville, IL.