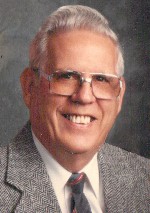 He was preceded in death by his wife of 70 years, Nellie Colleen, nee Simpson, Elam, whom he married on June 6, 1946 and who died on August 1, 2016; his parents, Edgar and Florence, nee Chatillion, Elam; one son, Bradley Elam; three sisters, Dorothy Absheer, Florence Reed, and Louise Reed; and a sister-in-law, Wanda Hemphill.

As a resident of St. Paul’s, I had the pleasure and honor of knowing Alfred and Nellie, having seen them regularly walking together and caring for one another. Alfred reminded me of my father, who was in the same way faithful and devoted to my mother. My dad was also, like Alfred, in the Navy in the Pacific in World War II. Dad served in the engine room of an escort aircraft carrier involved in the Battle of Leyte Gulf. His ship was hit by a kamikaze pilot; fifty-two lives were lost. I enjoyed talking to Alfred about his experiences on a destroyer. Our fathers were part of the generation which surely, by the grace of God, saved civilization for the world, including the children and grandchildren they had not yet met. God bless (as He already has) Alfred, Nellie, and their family.

The old neighborhood is really changing! We had a good one! So sorry for your loss!

I’m so sorry for your loss. I was a friend of Brad’s and I enjoyed talking to his mom and dad when he would ask me to check on them. Maybe that’s why I saw this. Out of the blue I had the urge to check on them. Now they both are whole again and I pray Brad is with them.