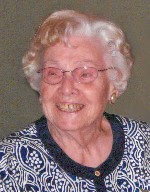 Mrs. Germann had worked as a bookkeeper for many businesses in the Belleville area.  She was a lifelong member of St. Paul United Church of Christ, Belleville, IL, where she volunteered at the church’s food pantry and worked in the office on the monthly bulletin.  She was a lifelong member of the Daughters of Naomi.  She was active in the Boys Scouts of America and the Girl Scouts of America.  Alice also volunteered for 20 years at St. Paul’s Home.  She worked at the gift shop, bingo games, and birthday parties, where she was known as “the cake lady”.

She was preceded in death by her husband of 51 years, Harold C. “Gammy” Germann, whom she married on December 15, 1945, and who died on June 13, 1987; a son, Allen Germann, in infancy; her parents, Emil and Lillian, nee Martin, Seiffertt; and two sisters, Doris (Ted) Tedesco and Norma (Red) Fetterhoff.

Memorials may be made to St. Paul United Church of Christ.  Condolences may be expressed to the family online at www.rennerfh.com.

I knew Alice and Gammy for many years. Played cards with Alice and Doris. You have my heartfelt sympathy for your loss of this wonderful lady.

Please accept my sympathy.
Your Mother was involved in
many activities at St. Paul’s
with My Mother, Florence Agne.
We will miss our Dear Mothers.