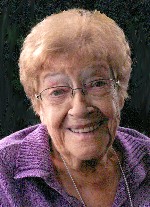 Mrs. Hoecker was a homemaker and also worked in housekeeping at the Apartment Community of Our Lady of the Snows and at St. Elizabeth’s Hospital.  She was a member of St. Augustine of Canterbury Catholic Church, Belleville, IL, a member of the Queenship of Mary Sodality at church, and a member of the Programs and Services for Older Persons (PSOP), Belleville, IL.

Alice was preceded in death by her husband, Donald H. Hoecker, whom she married on April 16, 1955, and who died on September 16, 2007; her parents, Fritz and Barbara, nee Burkemper, Luetkenhaus; a brother, Henry (Isabelle) Luetkenhaus; two sisters, Frances (Tom) Rothermich and Helen (Bill) Emge, and a daughter-in-law, Elizabeth Hoecker.

The Hoecker family would like to express their sincere gratitude to the staff at Cedarhurst of Shiloh for their loving care and support.

Memorials may be made to St. Jude Children’s Research Hospital or to the Children’s Dyslexia Center of Southern Illinois.  Condolences may be expressed to the family online at www.rennerfh.com.

Funeral: A Mass of Christian Burial will be held at 10 a.m. Saturday, January 21, 2017, at St. Augustine of Canterbury Catholic Church, Belleville, IL, with Msgr. William McGhee and Fr. Stanley Konieczny concelebrating.  Entombment of Mrs. Hoecker’s cremains will be held at Green Mount Catholic Cemetery Mausoleum at a later date.

To all of the families, we express our deepest sympathies for your loss. May you know that she is in our prayers at this time. We were unable to make it to the services due to illness. We will see all of you throughout the year and celebrate life with you.