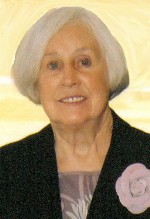 Alice worked as a ward clerk at St. Elizabeth’s Hospital, and later retired as a bookkeeper.  She was a member of Holy Childhood Catholic Church, Mascoutah, IL.  Mrs. Holtgrewe loved reading, gardening, and designing.  She volunteered for Hospice of Southern Illinois. She truly loved being a grandmother and great-grandmother, and will be dearly missed.

Memorials may be made to the School Sisters of Notre Dame. Condolences may be expressed to the family online at www.rennerfh.com.

Visitation: A private family visitation will be held.

Burial will be at Holy Childhood Cemetery, Mascoutah, IL.