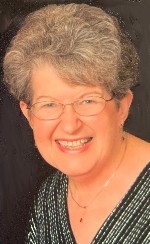 Alice was a first-generation American citizen born of French immigrants.  She grew up on a farm near Vincent, IA, and attended Fort Dodge High School and St. Joseph’s Mercy School of Nursing, both in Fort Dodge, IA.  She later earned her bachelor’s degree from St. Francis University in Joliet, IL.

At the encouragement of a mutual friend, Alice began to share letters with a young United States Air Force Airman, Jack Hutchinson, who became the love of her life.  They married on December 27, 1958, and shared the next 63 years together reveling in family (children, grandchildren, godchildren, nieces and nephews) and friends; enjoying travels and adventure, but always holding hands.

Alice worked for many years as a registered nurse at St. Elizabeth’s Hospital, Belleville, IL, where she ultimately retired but continued to serve as a hospice care nurse. She had a strong faith, routinely attending church at St. Peter’s Cathedral in Belleville, IL, and later Corpus Christi Catholic Church in Shiloh, IL.

She was preceded in death by her parents, Robert and Suzanne, nee Maury, Mathis; and a sister, Eliane Marie, nee Mathis, Rohden.

In lieu of flowers, memorials may be made to Hospice of Southern Illinois or Corpus Christi Catholic Church, Shiloh, IL. Condolences may be expressed to the family online at www.rennerfh.com.