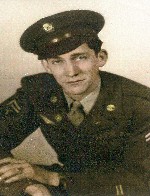 Mr. DeBoer worked at Southwestern Bell Telephone Company for 40 years before his retirement. He was an honored U.S. Army veteran, earning the Bronze Star Medal Citation for the performance of a heroic act while serving in Germany during World War II.  Pete enjoyed fishing, golfing, and singing. He recorded several cd’s and loved singing karaoke.

Visitation:  A private family visitation will be held from 10 to 11 a.m. Sunday, March 14, 2021, at George Renner & Sons Funeral Home, Belleville, IL. Standard CDC guidelines, including masks and social distancing will be observed.

Entombment with military honors will be at Lake View Mausoleum, Fairview Heights, IL.