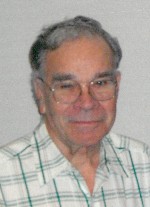 Mr. Sonnenberg worked for Midwest Rubber Company for 25 years before his retirement. He was a member of St. Augustine of Canterbury Catholic Church, Belleville, IL, and belonged to the Belleville YMCA. Al loved to watch movies and was a health enthusiast. He liked to stay in shape and eat healthy. He was an all-state wrestler at Belleville Township High School. Al was a U.S. Army veteran.

He was preceded in death by his wife of 48 years, Wilma K., nee Smistik, Sonnenberg, whom he married on September 17, 1955, and who died on April 19, 2004; his daughter, Laurie Launhardt; his parents, John and Stella, nee Rowlan, Sonnenberg; and his brother, John R. (Doris) Sonnenberg.

Visitation: Friends may visit with the family from 4 to 7 p.m. Tuesday, September 3, 2019, at George Renner & Sons Funeral Home, Belleville, IL.