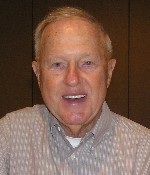 Alvin Eugene Tullock, son of the late Annie Pierce Tullock and Manford Eugene Tullock was born June 20, 1931 in Belgrade, Missouri. After high school he attended trade school to become a machinist and volunteered to serve his country in the Air Force in 1951 at the age of 21.  He served both actively and in the military reserves for more than 40 years. He retired in 2002 as a Senior Master Sergeant and Supervisor of the Machine Shop at Scott Air Force Base in Belleville, Illinois after 38 years of dedicated service.  After retirement he was certified to install and repair air conditioners and continued to do that throughout his remaining years.  He was well known for his precision, authority, work ethic and ability to build or repair practically anything.

Alvin was married to Alice Joanne (Scranton) Tullock in March, 1953. Their union was blessed with four children.  He was preceded in death by his parents, his brother Frank Tullock, and Joanne Tullock.

After (and before) his retirement he was known to all his friends, neighbors and family as the guy to call if they needed help with anything.  He could repair an engine, install an air conditioner, build a deck, pour concrete for a patio or fix a blow dryer. If he couldn’t do it immediately, he would read the manual, learn how, then repair it.  He didn’t believe in hiring anyone to do anything he could learn to do himself and save money.  Alvin was a motorcycle enthusiast and rode through most of his life. He was an avid reader of practically anything he could get his hands on, checking out large print books regularly from the Belleville West library.

He will be mourned and forever cherished by his four children, Mark (Kathy) Tullock of Smithton, Il, Michael  Tullock (Tony Combs) of Collinsville, Il, Kevin Tullock of Phoenix, Arizona and Karla Tullock (Doug) Meyer of Arlington Heights Il.  He is also loved and will be missed by his six grandchildren, Christina (James) Mason , Kimberly (Matthew) Hampel, Steven (Carrie) Tullock, Stephanie Meyer, Brendan Meyer, Justin Meyer.  He was also beloved G.G. (Great Grandpa) to four beautiful grandchildren, Levi and Piper Hampel, Cayleigh and Belle Mason. He will also be missed by his sister, Alice Marie Fields of St. Louis, MO, and by his nieces, nephews and cousins.

The family would also like to express their sincere appreciation for all that was done for their Dad this past year by his neighbors Dave Klingler, Joe Athmer, Lori McCann and his loving caretaker Donna Kepner. You looked out for him and your help made it possible for him to stay in his home where he wanted to be. He lived in his home in Belleville, IL for the last 53 years of his life.

Memorials may be made to the Cancer Research Institute, the Leukemia and Lymphoma Society or to the Belleville Public Library. Condolences may be expressed to the family online at www.rennerfh.com.