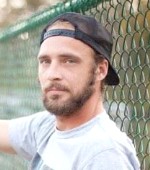 He loved to draw and astound an audience with amazing magic tricks and juggling acts.  Andy was an experienced skateboarder whose passion drove him to help establish the Belleville Skate Park and to share his skills with the up-and-coming skateboarding youth.  He was formerly involved with the Big Brothers / Big Sisters organization. Andrew was an avid bicyclist and participated in many St. Louis metro area rides and was an animal and nature-lover.

An absolute daredevil, Andy was fun-loving and lived every day to its fullest! He will be greatly missed by all who knew him.

Surviving are the light of his life and the joy of his heart, his daughter, Maylin Renee Hamilton;
his mother, Kathleen, nee Ernst, Rutledge;
three brothers, Christopher Litteken, Nathanael (Tiffania) Rutledge, and Jonathan Rutledge;
two sisters, Sarah Hamilton-Stump, and Rachel Alves;
the mother of his daughter, Christina Hamilton;
his dear aunt and uncle, Marilyn and Robert Buehlhorn;
special cousins, John Buehlhorn, Jim (Crystal) Buehlhorn, and Josh Buehlhorn, and many other aunts, uncles, and cousins;
his step-father, Mark Rutledge;
his step-grandmother, Lucy Rutledge;
close friend, Beth Pliego;
many nieces and nephews;
and countless dear friends, both in the area and across the country.

Memorials may be made to the Belleville Skatepark, for necessary improvements or additions. Checks should be made payable to Belleville Parks and Recreation and can be directed to Renner Funeral Home, 120 N Illinois Street, Belleville, IL 62220. Condolences may be expressed to the family online at www.rennerfh.com.

Funeral:  A celebration of Andy’s life will be held at a later date.