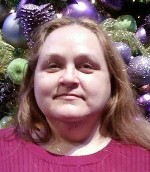 Angela was a loving wife, mother, aunt and grandmother.

She was preceded in death by her mother, Patricia Self, nee Smith; and one sister, Debra Henderson.