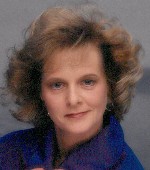 Print Obituary
Angela “Angie” Fellner, nee Jennings, passed away peacefully on Monday, September 25, 2017, surrounded by family at her home in Belleville, IL, after fighting a courageous battle with cancer. She was born in Belleville, IL, on February 26, 1959 to Robert and Dolores Jennings.

In her early career, Angie worked as a special needs caregiver at Specialized Living Center. She later started her own business as a caregiver for the elderly, all of whom became friends then family to her. Angie loved her husband Dave and her sons dearly and was a devoted wife, mother, sister, and friend. Her kind-hearted ways were noticed by everyone who met her and she was loved by all. Angie had a free-spirit and a sense of humor that was contagious. She loved her pets, her Volkswagen beetle “Elizabeth”, bears, Tinkerbell, and anything purple. Angie was known to make the best sugar cookies and share them with others. She enjoyed spending time with family and friends, especially the time spent with her neighborhood friends, the annual float trips, and the weekends in Okawville. Angie attended Calvary Chapel of St. Clair County and was a past member of St. Mary Catholic Church, Belleville, IL.

Memorials may be made to Our Lady of the Snows Shrine, Calvary Chapel of St. Clair County, or to the Belleville Area Humane Society. Condolences may be expressed to the family online at www.rennerfh.com.