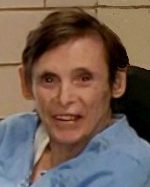 A long-time resident of the Murray Center in Centralia, IL, Angie recently moved home with her sister Gayle for her end of life journey. Angie touched many lives through her years at Murray Center and Kaskaskia Workshop. Those relationships continued during her time at home with Gayle.

Angie will continue to touch lives with her donation to the Harvard Brain Institute.

She was preceded in death by her father, Melvin G. Munie.

Special thanks to her many caregivers, especially Jeanne, Vicki, and Shelby, for their care and love. Also, a thank you is extended to the USPS, unbeknownst to them, for delivering Angie’s daily dose of sunshine and happiness.

Memorials may be made to Murray Parents Association, in care of Rita Winkler, 1535 West McCord, Centralia, IL, 62801. Condolences may be expressed to the family online at www.rennerfh.com.

Funeral: A Mass of Christian Burial will be held at 11 a.m. Tuesday, October 29, 2019, at St. Augustine of Canterbury Catholic Church, with Msgr. William McGhee officiating.