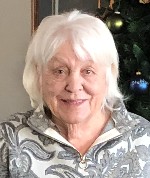 Anna worked as a manager in a major retail chain early in her life, until she decided to devote her entire time to her family. She was a completely all-in engaged wife, mother, grandmother, and friend. Even as Anna aged, she was involved in her grandson’s life and became known to many kids in the Freeburg area as “Naw”.  Her love and ability to light up a room carried through her life.

She was preceded in death by her loving husband of 60 years, William L. Tourville, whom she married on December 17, 1960; her parents; a sister, Margaret Knecht; and a brother, Bobby Joe.

We are grateful for the time that Anna was ours as a mother, mother-in-law, grandmother, and friend.

Memorials may be made to the Freeburg Care Center Activity Fund. Condolences may be expressed to the family online at www.rennerfh.com.

Anna will be laid to rest at Lake View Memorial Gardens, Fairview Heights, IL, next to her beloved Bill.