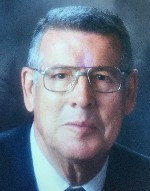 Mr. Kerkemeyer worked as a machinist for John Ramming Machine Company before his retirement.  Tony was a lifetime member of I.A.M. Lodge 41and belonged to a senior bowling league.  He was a member of St. Augustine of Canterbury Catholic Church, Belleville, IL, and was a veteran of the United States Army Air Corps.

Memorials may be made to the American Parkinson Disease Association, or to the Alzheimer’s Association.  Condolences may be expressed to the family online at www.rennerfh.com.

Visitation:  Friends may visit with the family from 4 to 7 p.m. Tuesday, February 28, 2017, at George Renner & Sons Funeral Home, Belleville, IL.

Sharon, Terry, Dennis and Melissa, we are so sorry for the loss of your father, you are in our thoughts and prayers.