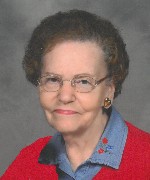 Mrs. Neff was a member of St. John the Baptist Catholic Church, Smithton, IL, where she was also a member of the Women’s Club and the St. John Quilters.

The family wishes to extend their heartfelt thanks to the staff of Legacy Place and to Heartland Hospice for their kindnesses shown to Arlene.

Memorials may be made to in the form of Masses, to St. John the Baptist Building Fund, or to Heartland Hospice.  Condolences may be expressed to the family online at www.rennerfh.com.

I remember as a child my family visiting with the Neff family. My parents and Tony and Arlene had been friends for many years. My sympathy to the Neff family. I will be keeping you in my thoughts and prayers.

Kathy, may God continue to be with you and your family as you have loving memories of your mom Mrs Neff

Sending our condolences. We will be thinking & praying for you & your family through these hard times.