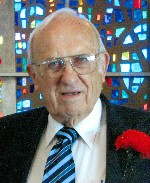 Print Obituary
Arthur H. Peters, 90, born on October 5, 1928, in Belleville, joined his Father in heaven on Wednesday, February 13, 2019.  Arthur was a beloved husband, father, grandfather and great-grandfather.  He had a deep faith that buoyed him through his final hours.  His faith, family and service to others were his guiding principles.

Arthur was married to his soulmate, Caroljean, for 65 wonderful years. He also cherished his three children and their families deeply, and he felt great pride in them all. In addition to his love of his immediate family, Arthur was a true friend to many extended family and community members.

Arthur’s service to church and community were defined by his devotion to the myriad committees and organizations, which he led and of which he was a part.  After returning home as a Korean War veteran, he began his career life by serving as a CPA, continuing that work for 33 years, primarily with the firm J.W. Boyle and Company.  Arthur then transitioned to leading St. Paul’s Home and Senior Community as Chief Administrator for 17 years.

In addition to his career investments, Arthur contributed to the Belleville community via significant volunteer involvements.  He served on the Memorial Hospital Board for over 30 years, 5 of those as Board Chairman.  St. Paul United Church of Christ was also the recipient of infinite volunteer hours on Arthur’s part; and he served as Treasurer of the Franklin Neighborhood Community Association for 26 years.  Arthur always put others before himself and believed that the greater good would be served by putting personal desires aside and cooperating with others.  He gave unselfishly and loved unconditionally.

Arthur was preceded in death by his father, Arthur S. Peters; his mother, Olinda M., nee Fischer, Peters; as well as his mother-in-law, Florence, nee Spies, Zwetschke, and her husband, Frederick Zwetschke.

Arthur’s survivors also include brother-in-law F. Thomas Zwetschke (Beverly); and their children, Laura, nee Zwetschke, Johnson, and her three children; and Bradford Zwetschke (Christina), and their seven children;  as well as numerous cousins.

Memorials may be made to The First United Presbyterian Church of Belleville, or the charity of the donor’s choice.