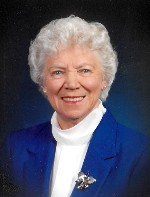 “Our mom relished her roles as mom, grandma, and great-grandma. She poured her heart and soul into showing her love for each generation. She and Dad raised four daughters. She tolerated our mischief for so long until the dreaded “wait until your father comes home” was said. She had an incredible sewing talent, from which her daughters benefitted. Later on in life, all the generations called upon her for her sewing skills.

There was nothing she wouldn’t tackle. When she was younger, she and Dad reupholstered and refinished our furniture. As recently as a few months ago, she delved into the Internet, participating in several podcasts with her grandson. She loved to play games, especially Rummy and Scrabble with all the generations. Her cooking skills included making sure foods from both her and Dad’s cultures were served at the table, and those recipes have been passed down to the succeeding generations.

Just like Dad, family was important to her. She surrounded herself in her home with all the things her family had made for her. She was the best—she was our mom, and we were blessed.”

Memorials may be made to St. Joseph Building Fund, St. Jude Children’s Research Hospital, Cardinal Glennon Children’s Hospital, or in the form of mass offerings. Condolences may be expressed to the family online at www.rennerfh.com.