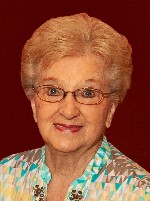 Mrs. Haas was a longtime, faithful member of St. Mary Catholic Church, Belleville, IL, where she served as a lector.  She was a woman of strong faith and believed in the power of prayer.  She loved her faith, her family, and her friends.  Bea was a proud graduate of the Academy of Notre Dame, Class of 1945.  She served as secretary at Cathedral High School and Althoff Catholic High School for 18 years, followed by working as parish secretary of St. Mary Catholic Church, Belleville, IL, for 17 years.

After retirement, Bea enjoyed time spent with her family, and a glass of wine with family and friends.  She enjoyed many years of traveling with her husband, LeRoy.  She also loved bowling, traveling with friends, stitching, reading, baking cookies and pies, and playing cards.  She was a volunteer for Hospice of Southern Illinois, the American Red Cross, and Meals on Wheels.  Bea was a reader to the blind with Mind’s Eye at the Shrine every Monday for 21 years.  Bea and LeRoy were members of a Marriage Encounter team and a Pre-Cana team, and Bea was a member of the Daughters of Isabella.

Visitation:  Friends may visit from 9 to 11 a.m. Saturday, October 31, 2020, at George Renner & Sons Funeral Home, Belleville, IL.  Standard CDC guidelines, including masks and a limited number of visitors at any one time will be observed.

Burial will be in Mount Carmel Catholic Cemetery, Belleville, IL.