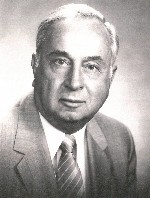 Bernie graduated from Stephen Decatur High School in 1941 where, during his junior year, he met the love of his life, Marilyn “Daisy” White. They married on July 25, 1942, and celebrated 73 plus years together.

He was drafted into the Army in February, 1943 and served in the Signal Company of the 76th Infantry in Patton’s Third Army. He returned to civilian life in February of 1946 and attended the University of Illinois, graduating in 1949 with an Electrical Engineering degree. He remained a lifelong supporter of Illini Athletics and was a life member of the Alumni Association.

Bernie promptly went to work at Illinois Power Company upon graduation and completed his career as Belleville Service Area Manager in 1987.

Bernie was an avid Cardinal baseball fan as well as an active supporter of both B.T.H.S. and B.T.H.S. East High School athletics. His greatest legacy and joy came from caring for his family.  In 1952 he began a tradition of family beach vacations that continues today.

Bernie had a passion for golf as a player and spectator, especially for following Belleville professionals, Bob Goalby, and Jay and Bill Haas. He enjoyed many years at his home course, Tamarack Golf Club, and also at Shadowmoss Golf Club in Charleston, SC.

He was preceded in death by his parents, Edward C. and Gladys (nee Grubbs) Hantle, a brother, Eugene Hantle, and two sisters Marie Chevron and Sharon Pulgar.

Memorials may be made to American Heart Association or the Juvenile Diabetes Research Foundation. Condolences may be expressed to the family online at www.rennerfh.com.

Visitation:  Friends may visit with the family from 4 to 8 pm Wednesday, July 20, 2016, at George Renner & Sons Funeral Home, Belleville, IL

Bernie was a man of honor, and value. He and Marilyn were our friends for almost fifty years. We are richer by their friendship and the example showed to us , how to treat others fairly, keep family and friends close, and love and respect others. Farewell DEAR FRIEND.
You have Blessed us and you will be well remembered by your friends near and far, and your wonderful family.
Love and Blessings. Bill and Loretta See

Deepest sympathy for The Family
I am sure he is going to be missed.
Donna Burns Pinkerton
Theresa Burns Miller