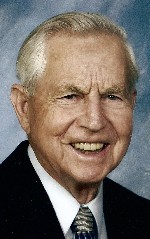 Ben was born February 26, 1923 in New Baden, Illinois, where he grew up like his rural neighbors: poor, but unconcerned because the garden, hunting and odd jobs kept them fed. A love of sports made him wish he’d been an athlete, but a knack for studies turned him into a scholar: his family’s first high school student and his class’ valedictorian.

World War II called after high school, when Ben was drafted into the U.S. Army. He served three years in the Infantry Ordnance with 18 months in New Guinea, Dutch East Indies and the Philippines and earned two battle stars. His payoff, though, was the chance to attend college. Ben graduated from Washington University in 1950 with a degree in Architectural Engineering.

Later that year he married Marcella A. Husmann. After five years in St. Louis they settled in Belleville, where they helped build a new Catholic parish, Our Lady Queen of Peace, and dove into life with a family that grew to six children.

Ben had a long and varied career working for Fruin Colnon Corporation, the St. Louis construction firm.  During his 35-year tenure with Fruin Colnon, he saw their scope of construction and engineering services change from a local to an international operation and spent many weeks traveling the world (but always back by Friday). He served as Vice President of Fruin Colnon Corporation and later, President and Chairman of the Board of Fruco Engineers, their design subsidiary. He was a registered professional engineer in seven states.

Ben believed in supporting community. He was a board member of Call For Help in Edgemont, Illinois; past president and member of The Serra Club of St. Clair County; board member for the Hincke Residence Home for Retired Priests; active in Our Lady Queen of Peace parish as lector, in the RCIA program, on the School Board and Long Range Planning committees.

He was a talented wordsmith whose stories about growing up are fortunately preserved in a family journal. His artistic gifts extended to painting, both watercolor and oil, and photography. His yard was the most public palette, with perennials and bird feeders providing the basis for great conversations about getting plants and birds to do what you want. (Basically, you have to put in the work.)

Retirement afforded Ben the opportunity to use millions of air miles to travel with Marcella and a group of friends to far-off places, and to take road trips to see his children and grandkids. Ever learning, Ben often planned these trips around Elderhostel sessions where he and Marcella tackled topics like poetry and history.

Ben instilled a love for trout fishing within his growing family by organizing regular trips to Montauk and Bennett Springs State Parks in Missouri, a tradition that lasts today and more important for the family togetherness it sponsors than the actual fishing. He was a patient Cardinals fan who appreciated the LaRussa years.

Ben was a wonderful man who made doing the right thing look easy, even when it wasn’t. He gave advice only when asked and you could count on it. His family made him happy, but his grands and great-grands really made him smile.

Memorials can be made for masses or to Our Lady Queen of Peace Parish, Belleville, Illinois.

Due to COVID-19 restrictions, visitation and a funeral mass will be private.