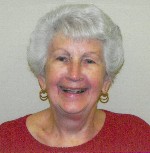 Mrs. Dressler worked as a computer operator for Commercial Transport for over 50 years before her retirement. She loved the St. Louis Cardinals, and loved to cheer them on at the stadium and at home.  If she wasn’t cheering on the Cardinals, you could find her supporting her grandchildren at one of their many events. She adored her family and was so proud of them all. Her children and her grandchildren were her greatest joys in life. Bernice enjoyed playing games with her family and her friends at the Shrine.  She was famous for her apple pies, holiday sugar cookies, and potato salad. She was a devout Catholic who loved the Lord and was ready for her reunion with her dear husband, Marvin. Her memory will live on through all of those that loved her.

She was preceded in death by her husband of 29 years, Marvin Dressler, whom she married on February 15, 1944, and who died on April 8, 1978; her parents, Charles and Laura, nee Stauder, Bauer; and two sisters, Sally (Glenn) Barthelme and Vera White.

Memorials may be made directly to Hospice of Southern Illinois, or in the form of Catholic Masses. Condolences may be expressed to the family online at www.rennerfh.com.