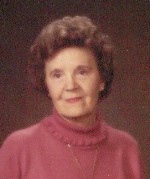 Mrs. Handrich was a devoted wife and mother.  She worked for Chicago Title in Belleville for many years and was a lifetime member of the Memorial Hospital Women’s auxiliary.  She belonged to PEO International, an educational organization for women.  Bernice was a long-time member of First United Presbyterian Church in Belleville and enjoyed many activities within the church.  Her last task at the church was as a librarian.

She was preceded in death by her husband of 25 years, William Henry Handrich, whom she married on June 9, 1940, and who died on October 9, 1965; one daughter and son-in-law, Millicent (Daniel) Chrusciel; a son-in-law, Paul Ground; her parents, Peter Kasper and Anna Elizabeth, nee Hirth, Voland; a brother, Kenneth (Jane) Voland; and a sister, Ruth (Art) Jacobs.

Memorials may be made to First United Presbyterian Church.  Condolences may be expressed to the family online at www.rennerfh.com.