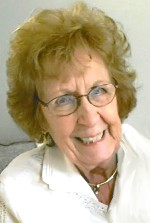 Mrs. Barton had worked as a private secretary for a prosecuting attorney and had previously worked at Ralston Purina before her retirement. She enjoyed reading and playing cards with her card club friends. Mrs. Barton loved having her husband fly them to Michigan, Missouri, Texas and Arkansas.  Most of all she loved spending time with her family.  Mrs. Barton was a loving wife, mother, grandmother, great-grandmother, and she will be deeply missed.

She was preceded in death by  her loving husband of 62 years, Harold S. Barton, whom she married on April 7, 1951, and who died on September 14, 2013,  a daughter, Laurie Schanz; her father, Joseph Cherneski; her mother, Frances A., nee Akey, Robinson; and a brother, Willard Cherneski.

Funeral:  A private Mass of Christian Burial will be held at St. John the Baptist Catholic Church, Smithton, IL.