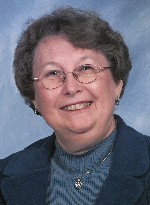 A native of Dowell, IL, Betty Kirkpatrick was employed at Plaza Bank in St. Louis when she met Robert Blanchard, whom she married on April 11, 1959. He served in the Air Force Reserve and was a reporter at the old St. Louis Globe-Democrat. They lived in Belleville from that date until 2018 when the family moved to the Central West End in St. Louis.

She served several terms as a Deacon and an Elder at Westminster Presbyterian Church in Belleville. She was a Sunday school teacher and sang in the choir. For several years, Betty was the leader of the ladies evening circle. She led the Christian Education Committee and several activities involving youth and adults at the church.

Betty was active in Church Women United of Belleville and was chairman of its nominating committee and past treasurer. She was also regent and chaplain of the Belleville Chapter, Daughters of the American Revolution.

She was president of the Wednesday Club Inc., an organization promoting education, philanthropy and art in the community. She has served as a mentor in a cooperative church-school program. She was a longtime leader of the Gideons International local camp, having served as president of the auxiliary. Her other organizations included the auxiliary of the Sons of the American Revolution, and she volunteered at BEACON of Belleville,

She was preceded in death by her parents, James and Stella, nee Smolak, Kirkpatrick.

Her body will be cremated. A private interment will be at Jefferson Barracks National Cemetery.