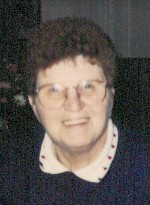 Mrs. Hartmann was a devoted mother to her children. She was a former member of the Bunsen Elementary School Mother’s Club, the P.T.A., and a Cub Scout Den Mother. She worked as a sales associate at Bollmeiers Hobby Shop for 20 years, then at Blanquart Jewelers, Belleville, IL, for 15 years. She thoroughly enjoyed her employment at both stores where co-workers and customers alike were like one big happy family.

She was a member of St. Paul United Church of Christ, Belleville, IL, and belonged to the Child Study Guild and the Women’s Guild at the church. A life member of the Memorial Hospital Auxiliary, Betty was also a member of the Fairview Heights Elks Lodge BPOE 664.

Betty was preceded in death by her husband of 63 years, Marshall L. Hartmann, whom she married on March 20, 1948, and who died on November 4, 2011; a daughter, Judi Herzog who died in 2015; a granddaughter, Jamie Wiegand; her parents, George C. and Lillian M., nee Felts, Brauer; seven brothers; and two sisters.

In lieu of flowers, memorials may be made to the charity of the donor’s choice. Condolences may be expressed to the family online at www.rennerfh.com.