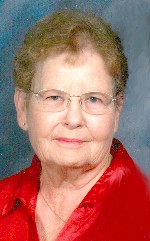 Betty grew up working in cotton fields in her youth with her family near Qulin, Missouri. She moved to St. Louis in the late 1950’s and worked as a surgical technician at St John’s Hospital and later at St. Elizabeth’s Hospital in Belleville, IL. Following her marriage to Cecil Charles Lampe in 1964, and the birth of her first child in 1969, she became a stay at home mother for sons, Michael and David.  She was active in her sons lives and assisted as a room mother at Shiloh Elementary School during the 1970s and 80s. She enjoyed traveling with her family, visiting with neighbors and friends, especially those met through Weight Watchers, and walking in mornings at St. Clair Square. She also enjoyed quilting, fishing, and gardening. Betty had been a member of Zion Lutheran Church, Belleville, IL, since 1965.

Memorials may be made to BJC Hospice or to the Alzheimer’s Association. Condolences may be expressed to the family online at www.rennerfh.com.

Visitation: Private visitation will be held Friday, October 16, 2020, at George Renner & Sons Funeral Home, Belleville, IL. Standard CDC guidelines, including masks and a limited number of visitors at any one time will be observed.

Funeral:  Private funeral services will be held Friday, October 16, 2020, at George Renner & Sons Funeral Home, Belleville, IL, with Rev. Brian Downs officiating. Standard CDC guidelines, including masks and a limited number of visitors at any one time will be observed.