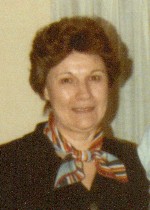 Mrs. Stauder was a homemaker.  After raising her seven children, she helped care for her grandchildren.  Over the years, she enjoyed playing bingo with her sister Mary Jane, fishing, bowling, while her faith in God guided her in daily prayer for her loved ones.

Memorials may be made to the Chestnut Health Systems of Belleville.  Condolences may be expressed to the family online at www.rennerfh.com.