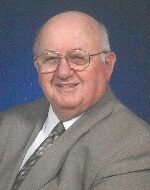 Bill was a loving husband of 66 years, father, grandfather, and great grandfather. He graduated from Belleville West High School where he ran track; finishing first in state high hurdles. Prior to Covid, the graduating class met for monthly lunches; Bill helped coordinate a number of reunions. He spent the majority of his career in retail, starting with Kaufmanns Grocery. When he first married his high school sweetheart, Betty Baechle, he worked at the A&P Grocery, Gasen’s/Super X Drug Store, the Rust Construction Company and as a bus driver for St. Clair Associated Vocational Enterprises (SAVE). Bill also did bookkeeping for Brunsmann Heating and Cooling.

Known as “Bingo Bill,” he was an active bingo caller for:  PSOP, Saint Teresa Catholic Church in Belleville, the C K &L of I in Belleville, Saint John the Baptist, and the Smithton Senior Center.

He was an active blood/platelet donor for decades. He was active in a variety of parish organizations at both Saint Teresa and Saint John the Baptist, including men’s club, Knights of Columbus, and former trustee of St. Teresa. He was a former member and past president of the Little Knights football club in Belleville where he also announced games.

In retirement, he and Betty managed reservations for the Smithton Senior Center. Bill was Santa for his grandchildren and great grandchildren, the Smithton Firemen, PSOP, the Senior Center, Mayor Kern’s annual toy drive, and a variety of family and friends. In 2013, he was awarded the Hall of Fame Award for a lifetime of outstanding service to the community of Smithton.

Bill was preceded in death by a son, Bruce A. Brauer; his parents, George and Lillian, nee Felts, Brauer; seven brothers, and three sisters.

Memorials may be made to St. John the Baptist Catholic Church or School, Smithton, IL, or to the charity of the donor’s choice. Condolences may be expressed to the family online at www.rennerfh.com.