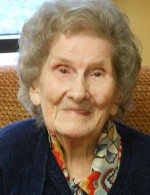 Blanche graduated from the Pennsylvania Uniontown Hospital Training School of Nursing in 1930 as a Registered Nurse. She worked at hospitals in Manhattan and New York City during her nursing career. In 1943 at the age of 33, Blanche, with more than ten years of surgical hospital nursing experience, volunteered for the U.S. Army Nurse Corps. She was sent to the Brooke Army Medical Center at Fort Sam Houston in San Antonio Texas, for a few weeks, to learn the “Army way of Nursing.”

1st Lieutenant Lyons and her surgical group were sent to England on the Queen Mary troop ship, in preparation for the “D-Day” invasion. They zigzagged all the way to avoid being torpedoed. They trained in England for a few weeks in preparation for the invasion. On D-Day plus 6, 1944 they were put ashore from an LST landing craft onto Utah Beach on the coast of France. Her Medical Unit followed General Patton’s 3rd Army approximately “three miles behind the front lines” caring for the wounded all the way to Germany. She served with the 5th Auxiliary Surgical Group during campaigns and battles in Normandy, Northern France, Rhineland, “The Battle of the Bulge” in the Ardennes Mountain Range and Central Europe.

Blanche and her surgical group returned to the U.S.A. awaiting transport to the Pacific Theater. However, the Pacific war ended, and Blanche was honorably discharged in September 1945. She was awarded the Bronze Star, American Campaign medal, European-African-Middle Eastern Campaign medal with four Battle Stars. She returned to New York City and worked as a civilian Nurse until the end of her career.

She married Richard Cobb at St. Patrick’s Cathedral in New York City in 1946. Richard was a U.S.A. Army Sgt. in the South Pacific during the war. The Cobbs spent the remainder of their working years in New York City. In 1984 they moved to the Apartment Community of Our Lady of the Snows Shrine, Belleville, Illinois.

Blanche remained a true patriot of the United States of America and never failed to vote. She lived her faith and throughout her life was an inspiration to her family, friends and all who knew and met her.

She is survived by numerous nieces, nephews, grandnieces and nephews in the Lyons and Cobb families.

Memorials can be made to the Apartment Community of Our Lady of the Snows in Blanche Cobb’s name. 726 Community Dr. Belleville, IL 62223-1026.  Condolences may be expressed to the family on line at the Renner Funeral Home website: http://www.rennerfh.com

Funeral: A Mass of Christian Burial will be held at 11:15 a.m. on Monday, February 27, 2017, at The Apartment Community Chapel, Our Lady of the Snows, 726 Community Dr., Belleville, Illinois, with Fr. Andrew Chalkey, OMI officiating.

Dear Lyons and Cobb Families, Please accept my sympathy on the loss of Mrs. Cobb, and I am thankful for her time and service to our country. I did not have the pleasure or honor of knowing her personally. I came upon her name by chance while reading the obituary section. Her life span of 107 years caught my eye. Mrs. Cobb’s span of life consisted of so many inspiring and incredible events. I shared her obituary with my 18 year old daughter. I wanted my daughter to hear and value the life story of what an inspiration and role model Mrs. Cobb was, especially for women during her time. Thank you so much for sharing her story and for letting me take up your time at such a sensitive time.
Godspeed Mrs. Cobb, Godspeed!

Thinking of you Aunt Blanche! Your funeral was beautiful and the military honors were moving. We always enjoyed coming to visit you, and you have a special place in my kids’ hearts. Rest in peace.

On behalf of the members of the Army Nurse Corps Association, I would like to extend our deepest sympathy for your loss along with our sincere gratitude for 1st Lieutenant Lyons’service to our nation.

Dear Cobb and Lyons Family members, I recently saw a letter to the editor in the Belleville News Democrat which mentioned Blanche and her accomplishments. I wondered if it was the same person I met years earlier. I had the pleasure of meeting Blanche while she was at Dammert. My mother was there as well. On several occasions, I chatted with Blanche because I saw the patriotic decor in her room which peaked my curiosity since I am a veteran as well. I enjoyed listening to her stories of her time in Normandy, France during WWII since my mother was a young child living in Brittany at the time. I was also intrigued by her abilities at her age. What a phenomenal woman! I wish I had known her sooner. My condolences on the loss of your cherished family member. What a very special life she had!