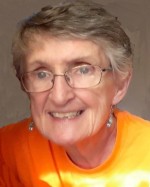 Bobbie was so kind and cared so much for others. She had a big heart for the poor and gave generously of her time to support them. Bobbie was a great friend and would give you the shirt off her back…literally. She was a very good listener and dug deep with her questions. She had so much love for her family and always prayed “for our children and grandchildren, that they be free from harm and always know how much they are loved.” Bobbie was a woman of deep faith, an artist, a faithful biker (at the YMCA), walker and yoga practicer. She was truly a daughter of charity.

She was preceded in death by two children in infancy, Carrie Laker and Laura Laker; and her parents, Robert and Judith E., nee Thompson, Sullivan.

In lieu of flowers, memorials may be made to the St. Vincent DePaul Society (Holy Trinity – St. Stephen Conference), or to Catholic Urban Programs. Condolences may be expressed to the family online at www.rennerfh.com.