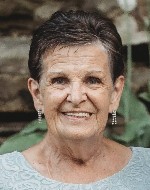 Bonnie retired from the banking industry after 30 years of service. She was a member of St. Henry Catholic Church, Belleville, IL. Bonnie was very active with the St. Henry Ladies Club at church, where she had previously served as president and treasurer. She adored her grandchildren and great-grandchildren, who were the light of her life.

She was preceded in death by her parents, Clarence P. and Marcella A., nee Schilling, Bassler; two sisters, Rosemary (Bob) Ivey and Sharon (Bob) Dietz; and a brother, Gregory Bassler.

In lieu of flowers, memorials may be made to St. Jude Children’s Research Hospital. Condolences may be expressed to the family online at www.rennerfh.com.

According to Bonnie’s wishes, cremation will follow the mass. Burial will be held at a later date.