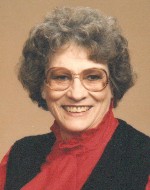 Mrs. Smith was a retired real estate agent.  She was a member of Faith Baptist Church of Freeburg.  Bonnie was an avid bowler, and she enjoyed sewing and playing darts.

She was preceded in death by her husband of nearly 39 years, Thomas E. Smith, whom she married on October 24, 1964, and who died on October 16, 2003; her daughter and son-in-law, Marie and Jim Fairchild; her parents, George and Lena, nee Dickerson, Cook; four brothers, Ola, Oscar, Jewett, and Cecil Cook; four sisters, Mary Alice Cook, Edith Brown, Nellie Rettig, and Hazel Abbott; and a nephew, Leroy Cook.

Memorials may be made to Family Hospice at www.familyhospice.org.  Condolences may be expressed to the family online at www.rennerfh.com.