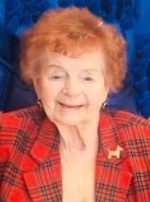 Brenda was a devoted daughter, wife, mother, grandmother and friend. Her kind spirit and gentle soul left an impression on everyone she met. Her extraordinary life journey is one to be admired. Brenda’s love to travel started at a young age when she crossed the ocean to marry her ‘Sweet William’. Brenda met Bill when he was stationed in England during WWII and was a member of the British Wives Club, later the Transatlantic Brides. Mrs. Burke, along with her husband Bill, was a very involved member of First United Presbyterian Church, Belleville, IL. She was a living example of her faith: with a compassionate, selfless, and tender heart, she served the Lord by showing grace and patience for all who crossed her path. In her early years, Brenda enjoyed working as a Tea Room Model in St. Louis, and then spent 16 years at the Greater Belleville Savings and Loan. She was also a member of Belleville Elks Lodge 481, Belleville/Swansea Woman of the Moose Lodge 1221. She had a permanent reservation at Fischer’s Restaurant, where many memories were made throughout the years. You could find Brenda on the dance floor, kicking up her heels to Big Band music. She enjoyed her “cuppa tea” and sharing her English traditions, painting, and entertaining friends during happy hour. Above all, her family was the light of her life. Her greatest joy were her precious children, including their dear spouses and dearest Grandchildren.

The family would like to thank the staff at the Esquiline ‘A Life Plan Community at the Shrine’ for the love and care given to our Mother.

In lieu of flowers, donations may be made to the First United Presbyterian Church or pay it forward by offering a kind gesture to a stranger, in memory of Brenda Burke. Condolences may be expressed to the family online at www.rennerfh.com.

Funeral: Due to current restrictions, Private funeral services will be held at 11a.m. Friday, November 13th, 2020 via zoom, at First United Presbyterian Church, Belleville, IL, with Rev. Robert Dyer officiating. A celebration of life and graveside ceremony will take place next spring.

Burial will be at Kolmer Memorial Cemetery, Waterloo, IL.