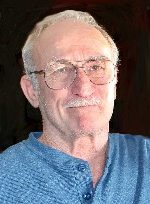 He was preceded in death by his wife, Debbie, nee Whitten, Morganstern, who died May 13, 2020; and his parents, Alfred and Beatrice, nee Murray, Morganstern.

Brian was born in Manchester, NH, in 1943, and moved to Belleville, IL, at the age of 9. He attended Belleville Township High School, where he was a linebacker on the football team, terrorized his teachers and graduated in 1961. In his early twenties, “Marblehead” enjoyed amateur boxing and most anything outdoors. In 1963, he started his career as a commercial artist with the Metro East Journal and later moved on to work for Reynolds Metals for 12 years. His artistic talent and vision heavily influenced much of his life. Aside from his profession, Brian created many paintings, drawings and quick doodles when his young kids begged him to draw something – mostly related to nature or sailing.

His favorite hobbies were sailing, camping and motorcycle trail riding. He and a buddy rode motorcycles from Illinois all the way to the tip of the Baja Peninsula, Mexico and back. Sailing was also a big part of his life. A favorite family story is to hear about the time that he made a sail and rigged up his canoe to sail on Lake Springfield. His last sailboat was 42 feet long… quite an improvement! Another fun Brian story is when, as kids, he and another friend built a wooden canoe with a canvas shell and, in the wintertime, launched it in the cemetery

lake. It quickly sank with him in it. That was a cold run home.

In 1974, Brian married the love of his life, Debbie, and they enjoyed 47 years together.

From 1977-1988 Brian worked for Southern Gravure, both in Carbondale, IL and Portage, MI.  While in Carbondale, Brian began building a hunting cabin in the woods. One day while working on it, a couple of officers approached him to let him know that it wasn’t allowed on SIU Forest Preserve property. After some rationalizations from Brian, he went for a little ride with the two gentlemen. In 1988, he and Debbie set sail from Holland, MI to St. Thomas, USVI to pursue his dream job of owning and captaining the sailboat, ​Morningstar​, on which he sailed tourists to the most beautiful locations, while Debbie managed the shop and tourism business they established. Brian always tried to share his adventurism with friends and family. After making a treasure map for his own kids when they were young and burying a treasure for them to find, he later did the same thing for his grandkids after moving to St. Thomas, and occasionally for guests on his boat. To quote a friend, “I always admired Brian’s desire to carve his own path in life. I remember when he and Debbie sailed to St. Thomas. I thought… wait, you can do that?!”

In 2008 they retired and moved to a log cabin (they actually bought this one) in southern Missouri near the Black River, where they spent their remaining years. There he enjoyed fishing, hiking, hunting, canoeing and camping with his beagles. He and Debbie both treasured time with family. He will be greatly missed by friends and family alike. “Brian had many talents and skills as an artist, poet, non-conformist, sailboat captain, boxer, risk taker, and his family meant a lot to him. Brian was a uniquely talented individual. You could depend upon him as a friend, and he would fight for you to the end,” wrote one of Brian’s life-long friends. He truly was larger than life.

A joint celebration of life for both Brian and Debbie will be planned after the resolution of the pandemic.

Memorials may be made to Travis Mills Foundation or Tunnel to Towers Foundation. https://travismillsfoundation.org
https://tunnel2towers.or​g

Condolences may be expressed to the family online at ​www.rennerfh.com​.