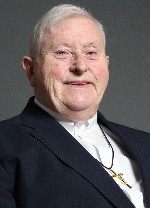 Br. Andy was born in Tullamore, Offaly, Ireland on October 15, 1947, to the late John and Ester, nee Hayes, Lawlor.

He made his First Vows as a Missionary Oblate of Mary Immaculate in 1995 at the Oblate Novitiate in Godfrey, IL and his Perpetual Vows at the Shrine of Our Lady of the Snows in 2001.

Br. Andy loved to represent St. Patrick each year in the annual St. Patrick’s Day Parade held in downtown Belleville.  He was passionate about helping someone in need including elder Oblates with errands and seeing that they made it to and from doctor appointments.

Br. Lawlor was preceded in death by his parents, John and Ester, nee Hayes, Lawlor.

He is survived by his brother, Sean Lawlor of Offaly, Ireland; his sisters, Nora Fenlon and Marie White of Offaly, Ireland, and Ann Robinette; many nieces and nephews, as well as great-nieces and great-nephews; and friends and Missionary Oblates of Mary Immaculate.  He also left behind his beloved Support Animal, Paddy.

In lieu of flowers, memorials may be made to the Missionary Oblates of Mary Immaculate USA, 9480 North DeMazenod Drive, Belleville, IL 62223. Condolences may be expressed online at www.rennerfh.com.

Visitation: Friends may visit from 10 to 10:30 a.m. Saturday, November 12, 2022, at the National Shrine of Our Lady of the Snows Catholic Church, Belleville, IL.

Funeral: A memorial mass will be held at 10:30 a.m. Saturday, November 12, 2022, at the National Shrine of Our Lady of the Snows Catholic Church, 442 South DeMazenod Drive, Belleville, IL.

Burial of cremated remains will be in his native Ireland at a later date.