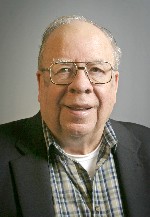 Brother Bill was born in 1938 to the late Milton and Arita Lundberg in Minneapolis MN. Prior to joining the Missionary Oblates of Mary Immaculate, he served in the U. S. Navy for six years, both in active duty for two years, and in the Naval Air Reserve for four years.  He joined the Missionary Oblates of Mary Immaculate, pronouncing his first religious vows in 1963, and perpetual vows in 1969.

In 1963, Brother Bill Lundberg joined the retreat team at Kings House in Henry, IL. After finishing his ministry at Kings House, he joined the pastoral staff at the National Shrine of Our Lady of the Snows. He also spent time on staff at St. Henry’s Seminary in Belleville, IL, and spent many years serving people in both Sisseton, SD, and White Earth, MN, before retiring in 2012 at St. Henry’s Oblate Residence in Belleville, IL.

Brother Bill was preceded in death by his parents, Milton and Arita Lundberg.

Mourning his passing are his sister, Margaret (Jim) Schneider;
a brother, Paul (Paula) Lundberg;
one niece;
five nephews,
three great-nieces;
11 great-nephews;
one great-great niece;
one great-great nephew;
and many good friends;
as well as some 3700 Missionary Oblates of Mary Immaculate serving in 60 countries.

In lieu of flowers, donations to the missions of the Oblates of Mary Immaculate would be greatly appreciated. Condolences may be expressed to the family online at www.rennerfh.com.

Visitation:  Friends may pay their respects from 8:30 to 9:30 a.m. Monday, March 15, 2021, at the Church of Our Lady of the Snows. Standard CDC guidelines, including masks and social distancing, will be observed.