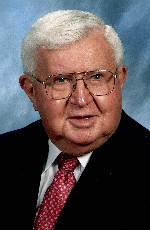 Print Obituary
Burnell Albert Heinecke, 91, died at 4:35 am, Wednesday, December 5, 2018 at Lewis Memorial Christian Village.  He was born June 11, 1927 in Mascoutah, the son of Herman and Olivia, nee Emge, Heinecke.

He was raised in Freeburg, and immediately upon graduation from Freeburg High School enlisted in the U.S. Navy where he served aboard aircraft carriers Kula Gulf (CVE 108) Ticonderoga (CV14).

A 1950 honors graduate of McKendree College at Lebanon, he worked for two years at the Belleville Daily Advocate before joining the staff of the Chicago Sun-Times.  In 1956, he was selected to become a Nieman Fellow in Journalism at Harvard University.

During most of his 23 years with the Sun-Times, he was involved with state and legislative issues, and during his 10 years as Bureau Chief in the State Capitol also served as president of the Illinois Legislative Correspondents Association.  There, he helped create its ILCA Gridiron Dinners. He has an ILCA scholarship in his name at the University of Illinois at Springfield.  While it was still Sangamon State University, he had taught an introduction to journalism class there 1976 to 1978.  He also serviced as president of the Central Illinois chapter of the Society of Professional Journalists.

He covered the administrations of William Stratton, Otto Kerner, Sam Shapiro, Richard Ogilvie, Dan Walker and Jim Thompson.  After resigning from the Sun-Times in 1975, he created Heinecke News Service serving 39 Illinois publications (mostly weeklies) and publications in Chicago, Washington and New York City. Faced with a 1978 recession, he joined the campaign staff of Jerry Cosentino, and after his election as state treasurer became an administrative assistant, a position he also held under State Treasurer James Donnewald.  One of his proudest achievements as Legislative Liaison was helping draft and secure enactment of the Illinois Farm Development Authority.  Later, he worked for two years as assistant to the Director of Labor under the Thompson administration.

As a permanent resident of Springfield after 1965, Burnell had a chance to exercise his performance interests in the local theatres.  Although he once had the lead role of Herbie in Muni’s Gypsy, his favorite roles were as a pirate in two productions of Peter Pan and as the grandfather in Ragtime.  Besides acting with the Springfield Muni Opera and Springfield Theatre Guild, he also performed roles in short plays by Midwest Playwrights and had movie roles in NBC’s The Awakening Land and more recently had a spotlighted segment in Legally Blonde 2.

He served on the Board of Managers of both the Muni and Theatre Guild and had key roles in several Muni building projects while also serving as Producer or Production Coordinator for shows from 1968 through 2007.  He also served 1978-1980 on one of the first Illinois Humanities Councils that helped pave the way for creation of Illinois Public Radio networks after a failed attempt to create a statewide public television network.  That led to his being asked onto the Western Illinois University Foundation Board.  After 25 years of service there, he was given lifetime status and continued work on its Scholarship Committee screening honors applicants.

Earlier, he had served two terms as president of the McKendree College Alumni Association and was honored by the college with its lifetime Outstanding Graduate in Journalism Award.

Burnell was a lifetime member of St. Paul’s United Church of Christ in Freeburg and a member since 1946 of Locklar-Smith Post 550 of the American Legion in Freeburg.

Memorial may be made to McKendree College, Lebanon, IL, Springfield Muni Opera or to St. Paul’s United Church of Christ, Freeburg, IL. Condolences may be expressed to the family online at www.rennerfh.com.