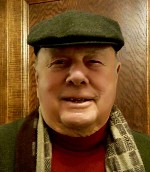 Mr. Wolf was born on his family farm, where he gained a great contentment and fulfillment early in life as a farmer and later, an avid gardener. Butch developed a deep love of nature and was a great outdoor sports enthusiast. He was a former member of the Freeburg Sportsman’s Club and a current member of the Okaw Hunting and Fishing Club.  He enjoyed gardening, Cardinal baseball, reading, fishing, jazz, big band music, and playing euchre with friends. He was the number one fan at his children’s and grandchildren’s events. He was an avid collector of brewery memorabilia, specifically Stag beer.

Butch was a man of faith, a devout Catholic, a lifelong member of St. Joseph Catholic Church, and a member of the Men’s Club at the church. He lived by the golden rule.  He was a U.S. Army veteran, a member of the American Legion Post #550, and was a heavy equipment operator before his retirement.  Butch was the master of the lost art of conversation, didn’t know a stranger, and was a friend to all.  He maintained multi-generational relationships in the area.  His great mind, life-long love of learning, and natural curiosity made him knowledgeable on a wide range of topics. He had an indomitable spirit and robust constitution. He broke the mold. Butch was our beloved father, grandfather, brother, brother-in-law, uncle, great-uncle, neighbor, and friend.

Memorials may be made to MindsEye, a service for those with visual disabilities, or to the Disabled American Veterans. Condolences may be expressed to the family online at www.rennerfh.com.

Burial with military honors will be at St. Joseph Catholic Cemetery, Freeburg, IL.