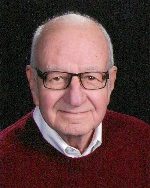 A 1949 graduate of Belleville Township High School, he went on to earn a degree from the University of Illinois and served in the U.S. Army from 1954-56.

Carl then enjoyed a 37-year career as a general engineer with McDonnell Douglas Aerospace Company in St. Charles, Missouri. His professional claim to fame was the Coal Research Center at Southern Illinois University in Carbondale and development of a simulator to help train dragline operators.

He was an active member of St. Augustine’s Catholic Church in Belleville and, later, St. Henry’s Church, where he sang in their adult choirs. The Metro-East Community Chorale also benefited from his talents, both as a bass/baritone and from his exacting nature as the club’s treasurer. He was a member of the Elks Lodge 481 and Moose Lodge 1221.

There wasn’t much that Carl couldn’t do or couldn’t fix. Long after he retired as an engineer, he continued to tinker.

The set of Lionel trains he got when he was 3-years-old came out of the original box every year to circle the Christmas tree and the complicated control panel he built to keep it chugging still looks like it belongs in the cockpit of a DC-10.

When the family basset hound was expecting, he employed a few extra wires, a spare switch and a cookie sheet to fashion a suitable dog-house heater to keep her and her puppies warm. When his fifth grader landed the role of ship’s captain in the school production of “HMS Pinafore,” a party hat from Long John Silver’s just wouldn’t do. But some poster board, silk thread, a used baseball cap (sans bill), an old blazer, and Pop’s ingenuity went into a wardrobe worthy of Trevor Howard in “Mutiny on the Bounty.”

Without the benefit of any formal training, Carl could play several musical instruments. He made his own wine, mixed a mean Manhattan, could write a song and break down with mathematical precision the best count for the hit-and-run. There was no mechanic, electrician, plumber or gardener who could do the job any better than he could do for himself.

Four times in his life, he amazed his doctors by beating cancer.

More than anything else, Carl was a loving and reliable anchor for his family.

A man of few words, Carl spoke volumes through example. His drumbeat consistency set the rhythm for an active household and his greatest legacy will be the influence he’s had on four sons and a daughter who idolized him. He possessed endless patience and a clever and often hilarious wit.

On the occasion of the 60th wedding anniversary with his wife, Marilyn, Carl shared his secret for a successful marriage: “It’s not the 60 years that count, it’s the 21,900 days that matter. That’s how you take things — day by day — and most of them will be great.”

The family wishes to thank the employees of Mercy Rehab and Care Center and Hospice of Southern Illinois for their tender care of Carl during the final months of his life.

In lieu of flowers, tributes and donations may be sent in Carl’s memory to St. Henry’s Catholic Church or to the Children’s Miracle Network. Condolences may be expressed to the family online at www.rennerfh.com.