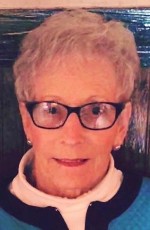 Print Obituary
Carol Hudack, nee Muckensturm, age 87, passed away peacefully in her sleep at her residence at The Benedictine Living Community – at the Shrine.

Carol attended St. Mary’s Grade School and graduated from Notre Dame Academy in Belleville. While in high school she was a proud member of the Bellettes Drum and Bugle Corps.

Carol married Lee Hudack on May 7, 1955, at St. Mary’s Catholic Church in Belleville. They first resided in Sterling, CO, where she was employed as the Secretary to the City Manager. From there due to her husband’s career transfers they lived in Denver, CO, Billings, MT and Whittier, CA. During that time, they were blessed with two children, Mary Anne and Stephen. While being a stay-at-home mother, Carol was involved with her children’s school activities and other activities as well. She also was an avid Bridge player during this time.

In July 1965 they moved back to Belleville. Carol decided to go back to the workplace. She was Administrative Secretary with School District #118, and then began a twenty-year career with Belleville Area College (SWIC). During that time, she enjoyed several positions: among them Secretary to the Dean of General Studies and Community Services, the first Secretary for the Belleville Area College Foundation, member of the Presidential Search Committee in 1980, and Field Coordinator for RSVP. She retired as Director of SWIC’s PSOP Senior Companion Program. She was Vice President of the Illinois of Foster Grandparents and Senior Companions Directors and was a member of the Illinois Department of Aging Community Care Program.

Carol was a member of Our Lady Queen of Peace, having served as the President of Sodality and Mother’s Club and member of the Stewardship Committee. She served as community volunteer with the Belleville Mental Health Bord of Directors, Advisory Council for PSOP, Speakers Bureau for the St. Louis Alzheimer’s Association, Allocations Committee for United Way of Greater St. Louis, Muscular Dystrophy Association and was on the Belleville News Democrat Advisory Council. She was also active with the Belleville Ladies of the Elks. In 1999, she was honored for her service to the aging and volunteerism by being presented with Sister Mary Simpson Award by Southwestern Illinois Area Agency on Aging.

After her retirement, Carol and Lee enjoyed traveling, especially to visit their children and grandchildren. They cherished the times they were called to stay with their grandchildren when there was a need. They also spent time attending Cardinal spring training games in Jupiter, FL while visiting with their son and his family, and enjoying the beautiful beach in Clearwater, FL.  Carol continued spending time with her family in Jupiter, FL, Jacksonville, FL, Lake Tahoe, NV and San Francisco, CA after the death of her husband. She also enjoyed regular luncheon and dinner dates with high school friends, neighbors, and her close family members.

In August 2018, Carol moved to the Esquiline Apartment Community at the Shrine of Our Lady of the Snows. Once there, she joined many friends made while raising her family and met many new friends.

Carol’s family would like to give a heartfelt thanks to her caregivers for the past two years, Ebony Hudson, Ashley Hudson and Tiffany Madison.

In lieu of flowers, memorials may be made to the Parkinson’s Foundation or to the charity of the donor’s choice. Condolences may be expressed to the family online at www.rennerfh.com.

Visitation: Friends may visit from 9 to 10 a.m. Tuesday, November 15, 2022, at Our Lady Queen of Peace Catholic Church, Belleville, IL.

Funeral: A Mass of Christian Burial will be held at 10 a.m. Tuesday, November 15, 2022, at Our Lady Queen of Peace Catholic Church, Belleville, IL.