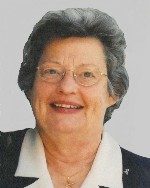 Mrs. Percivall was an exceptional mother, grandmother, and great-grandmother, and loved to spend time with her family.  She worked for several years as a telephone operator before her marriage.  Carolyn was a graduate of BTHS and still enjoyed luncheons with former classmates. She was a member of Crossroads Christian Church, Caseyville, IL.

Carolyn was preceded in death by her husband of 56 years, George Percivall Jr., whom she married on May 1, 1954, at Signal Hill Methodist Church, Belleville, IL, and who died on January 9, 2010; her parents, Jesse F. and Helen L., nee Classen, Swacker; one sister, Shirley (John) Neal; a son-in-law, Thomas Hull; and a brother-in-law, John S. Percivall.

Memorials may be made to St. Paul’s Senior Living Community or to Hospice of Southern Illinois.  Condolences may be expressed to the family online at www.rennerfh.com.

Burial will be at Lake View Memorial Gardens, Fairview Heights, IL, at a later date.