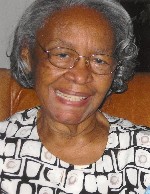 Carrie was a member of the former Mt. Zion Baptist Church in Belleville, IL.  She was employed at the Bismark restaurant in Belleville, IL, when she completed and received her certification from the St. Louis Public Schools of Technical and Related Instruction in Quantity Food Preparation sponsored by the Food Service Industry Career Guidance Council in 1961. After leaving the Bismark restaurant, Carrie was employed at the Lincoln Jug, Belleville, IL, as head cook and kitchen manager for over twenty-five years until she retired.  She was especially known for her steaks and homemade soups. Carrie also received her certification in Foodservice Sanitation in 1979 from Belleville Area College and the State of Illinois Department of Public Health.

Raised on a farm, Carrie appreciated nature and loved the outdoors and enjoyed sitting in her backyard.  She loved to cook, sew, quilt, and garden. Carrie was admired for her flower garden and her beautiful roses; a family friend refers to her as “the rose lady”. Known as “Gram” to many, Carrie was a wonderful neighbor and friend.  Humble and kind, she never met a stranger; everyone was welcome.  Her favorite thing was time spent with her family and she loved them all unconditionally.

Memorials may be made to the National Kidney Foundation. Condolences may be expressed to the family online at www.rennerfh.com.