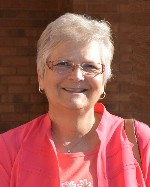 Mrs. Rickard worked for many years as a supervisor for AG Edwards & Sons.  She also worked as the school secretary at St. John the Baptist Catholic School in Smithton, IL.  After her retirement, she enjoyed being a member of the former Red Hat Ladies Lunch Group.  She was a master cookie baker and loved crafting of any kind. Cathy was especially known for her card making and family picture taking.  She never missed a year of making advent calendars for everyone. A devoted mother, sister, aunt, grandmother, and great-grandmother, Cathy never missed a sporting event in which her grandchildren were involved and was a serious hockey grandma.  She was very strong in her Catholic faith and a very active member of St. John the Baptist Catholic Church, Smithton, IL. She was lover of all holidays, especially Christmas, and always worked to make each one special for those she loved.

She was preceded in death by her husband of 30 years, Edward Rickard whom she married on January 8, 1977, and who died on May 9, 2007; her parents, William and Mary, nee Quirin, Weber; two nephews; and a brother-in-law, Lloyd Jacquot.

In lieu of flowers, memorials may be made to St. John the Baptist Catholic Church, Smithton, IL.  Condolences may be expressed to the family online at www.rennerfh.com.