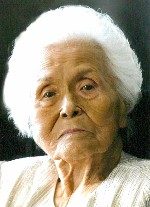 Michi was the eldest daughter of Jisaburo and Fushiko Sato. She married Technical Sergeant Robert Slackman in February of 1951, in Fukuoka, Japan, and became a naturalized U.S. citizen in April of 1955. As an Air Force couple, and later a family, they traveled extensively and were stationed at Hill Air Force Base, Utah, Blytheville AFB, Arkansas, Kaden AFB, Okinawa, Japan, and finally, Scott AFB, in 1963.

Michi devoted her life to creating a warm and loving home for her family, while occasionally working outside the home for several local businesses. Michi especially enjoyed caring for her grandchildren, eating at local restaurants, crocheting, and watching the Food Network. She was famous among family and friends for her “Grandma Michi sugar cookies.”

She was preceded in death by her husband of 48 years, Robert Slackman; and her parents, Jisaburo and Fushiko Sato.

Memorials may be made to a charity of the donor’s choice. Condolences may be expressed to the family online at www.rennerfh.com.