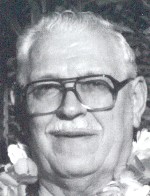 Mr. Bogovich retired from the U. S. Air Force where he received the United States of America Meritorious Service Medal (1 OLC), the Joint Service Commendation Medal, the Air Force Commendation Medal, and multiple other awards and decorations during his career. Chuck raised his six children in the Philippines while serving his country. After his retirement from active duty, he worked as a procurement specialist at the Scott Air Force Base Air Force Communications Command, and also worked as a security officer for the Yale Security Company. Chuck was a member of the American Legion Post 58 Freedom Farm where he served as the Post Commander two times. A skilled woodworker and crafter, Mr. Bogovich was an avid outdoorsman.  He was a member of St. Teresa’s Catholic Church, Belleville, IL.

Chuck was preceded in death by his wife of 39 years, Julie A., nee Gula, Bogovich, whom he married on December 4, 1969, and who died on January 25, 2008; a daughter, Mary H. Owens; a son, Chuck Halfhill; his parents, Joseph M. and Barbara R., nee Hodnick; Bogovich; and a brother, Edward E. (Kaye) Bogovich; a brother-in-law, Thomas George; and a sister-in-law, Marie Bogovich.

Visitation:  Due to Covid-19 restrictions, a private visitation will be held on Wednesday, June 17, 2020, at George Renner & Sons Funeral Home, Belleville, IL