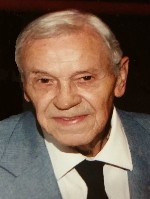 Mr. Huff retired after working for many years as a driver for the Bi-State Agency.  He was a devoted husband, father, grandfather and friend. He was a World War II veteran of the U. S. Army.

In lieu of flowers, donations can be made in Charles’ name to St. Paul’s Senior Community’s Activities Department in Belleville, IL. Condolences may be expressed to the family online at www.rennerfh.com.

Funeral:  A private memorial service will be held with interment of cremains at Lake View Memorial Gardens, Fairview Heights, IL, at a later date.